AS Monaco’s stance this summer over transfers has been clear in one way, some players will be sold and others not, but not clear in which players fall into which category.

A lot depends on how hard the footballer is prepared to push and how high a buying club is prepared to go, and that seems to be the case with Arsenal target Thomas Lemar.

Arsenal have now submitted three offers for the attacker, which shows a certain determination and probably a feeling they’re not chasing a lost cause.

Friday’s edition of L’Equipe looks at Monaco’s chase of Rachid Ghezzal, and how that could lead to Arsenal getting their man. Ghezzal is available on a free transfer after his Lyon contract ran out.

There have been repeated attempts at a renewal, but the two parties never quite got there, and Monaco are now edging in. The French newspaper end their article by saying: ‘Lemar wants to go to Arsenal and the arrival of Ghezzal in Monaco, if confirmed, could 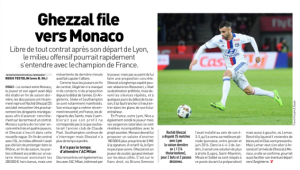 Arsenal may well well have a little light at the end of the tunnel, and Gunners should probably be rooting for Monaco to get Ghezzal signed up. Other clubs remain interested, but it’s Monaco pushing forward with most intent right now, a situation Arsene Wenger will be very conscious of.