In their Monday edition, Ekstra Bladet has a big feature on Wahid Faghir.

The footballer, still just 16 years of age, is described as ‘the next Zlatan’ and inevitably hyped up. Leicester City were linked with a swoop for the Vejle Boldklub youngster prior to Christmas, and Ekstra Bladet publish further details on the Foxes interest.

It’s claimed Leicester have been rejected, having submitted an offer for Faghir. The bid amount is put at 68.5m KR, which works out to be just under £1m.

That was ‘flatly rejected’ because even now, Vejle Boldklub believe the player is worth more.

An exit, even in the winter market, isn’t completely excluded, and it’s explained Faghir may be another youngster to catch attention for his progress in Denmark, but to not then go onto playing senior football regularly in the country. 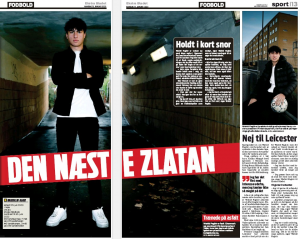 There’s interest from elsewhere, however, it’s the Leicester City offer which is highlighted, perhaps to make the point that such an amount isn’t close to what Vejle Boldklub are looking for.