Everton continue to be linked with multiple players from Serie A, and that will likely be the case for the entire period Carlo Ancelotti is with the club.

Monday’s edition of Corriere dello Sport reports an ‘important offer’ has arrived at Inter Milan from Everton for Matias Vecino.

He’s a 28 year old midfielder from Uruguay, and whilst Inter aren’t completely set against a sale, it’s thought letting him go to Goodison Park, or elsewhere, would leave Antonio Conte short in the position.

That’s one of the reasons Inter are interested in a swap deal involving their striker Matteo Politano and AC Milan’s Franck Kessie. Inter need to get a forward off the books if they want to sign Olivier Giroud from Chelsea this month.

There’s also been suggestions of a swap between Vecino and Kessie, and the situation seems rather complicated. 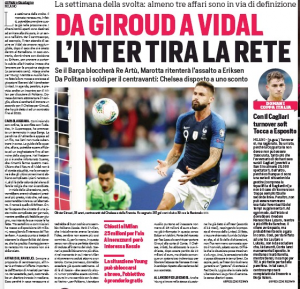 Should Everton’s offer be genuine then the Toffees will likely have to wait and see what happens with Inter’s other potential deals first.