Leicester City have once again scouted a Porto match this week, according to Portuguese newspaper A Bola.

After watching the Dragons a few times this season, the Foxes were now back to the Estádio do Dragão for the Champions League clash against Liverpool.

Porto ended up being thrashed 4-1, a result which gave the Reds a place in the semifinals. But still, the Portuguese side had a good campaign in the tournament.

A Bola doesn’t say who Leicester City had an eye on, and there’s only one Porto player who’s been linked to the club, which is Moussa Marega. 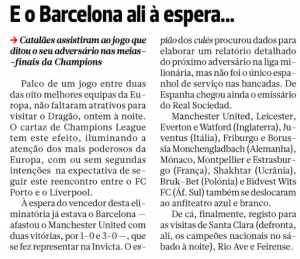 Just like at Anfield, Marega did well finding himself in good positions many times, but failed to score. That was quite disappointing for Porto fans who expect a lot from him.

With 18 goals and 11 assists this season, the 28-year-old is currently protected by a €40m release clause.

Porto players Jesus Corona, Hector Herrera, Eder Militão and Yacine Brahimi were those who did well for the home side, and may have caught Leicester City’s attention. Except for the Brazilian defender, who’s already been sold to Real Madrid and is moving in the summer.