Sky Sports claimed the French media have been reporting Leeds, West Brom and Everton are keen on the Marseille player. However, the French reports don’t actually exist and it appears to have come from a mess on social media.

We thought that link was strange, and something today has topped it.

Reading Italian newspaper Corriere della Sera, who aren’t really close to the top of the usual nonsense charts, there’s a sentence rounding off an article… and it jumps out.

The newspaper claims Leeds United are trying to sign Gianluigi Buffon, along with Fluminense and Porto. The goalkeeper, who left PSG this summer at the end of his contract, is currently considering his options and offers.

Buffon is 41 years of age and a move to Elland Road would be hugely surprising. 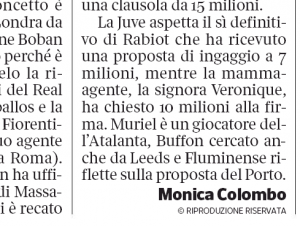 Even if it’s true that Leeds are keen, it takes a great leap to believe the Juventus legend, known to be fiercely proud, would accept a season in the Championship to round off his career.