Kiko Casilla was restricted to only five appearances in all competitions with Leeds United last season, as back-up to the Whites’ first-choice goalkeeper, Illan Meslier.

The Whites allowed the goalkeeper to join Elche CF on loan last summer. He featured regularly for the La Liga side when Fran Escribá was in charge of the club, making 12 league appearances before the end of October 2021.

Elche then sacked Escribá and appointed Francisco as his successor. The latter has preferred Édgar Badía ahead of the Leeds United owned player, forcing Casilla to spend time on the bench.

Today’s edition of Diario Información states Casilla ‘will return to the English club’ in the summer, while Elche will look to sign a new keeper, who will fight with Badía for a place in the starting lineup next season.

It’s said ‘Kiko Casilla will be released after the end of his contract with Leeds’. The report further adds Francisco has liked his professionalism, and at a ‘good price’ [likely salary], his continuity at Elche is ‘not ruled out either’. 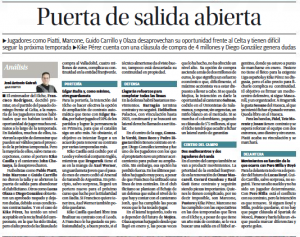 It’s worth noting Casilla’s contract with Jesse Marsch’s side lasts until 2023.

If Leeds were to release the Spaniard after this season, then there is a possibility for him to join Elche. Otherwise, they or another club will have to find an agreement with the Whites to sign the keeper.