Leeds United are keen on Hertha Berlin midfielder Matheus Cunha, who wants to leave the German club this summer.

That’s according to SportBILD, who say Marcelo Bielsa’s side wanted a deal in the January transfer window.

Cunha has had a relatively impressive campaign for Hertha despite their struggles in the Bundesliga, with seven goals and six assists in 27 league games so far.

Those are decent numbers in a side fighting relegation and have apparently earned him admiring glances from England.

SportBILD report that Leeds are ‘interested’ in the 21-year-old Brazilian and had already ‘enquired’ about him six months ago.

That interest is now ‘becoming more concrete’ ahead of the summer, although there is no mention of an asking price or talks being held as yet.

Cunha is keen to leave the club, though, so that could work in Leeds favour should they decide to make a move. 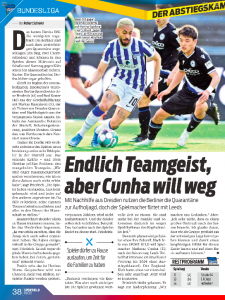 The biggest issue is his contract, which runs until 2024 and does not contain a release clause, meaning Hertha can demand whatever they want for the forward.

Given they paid £16.2m to sign him from RB Leipzig in January last year, it’s likely they’ll want upwards of that, but we’ll have to wait for further reports to find out their stance.

Either way, Leeds are apparently still keen after trying in the past as well, so Cunha’s is a name to keep a close eye on this summer.