It was also stated the Red Devils have contacted Los Rojiblancos, to make an offer around €80m.

Manchester United are not the only club credited with interest in the 26-year-old as they are joined by Bayern Munich and Paris Saint-Germain. That’s what AS are reporting today.

The newspaper also stress the La Liga side have plans to extend the Spain international’s contract.

It’s claimed the club’s supporters were angered when the report of United’s interest to sign Llorente emerged, as they feared Atlético would sell the midfielder.

This, coupled with Llorente’s ‘extraordinary performances’ has convinced the club to offer him a new deal.

His current deal runs down in 2024. the club ‘intensified’ conversations for the renewal in recent weeks, after Ole Gunnar Solskjaer’s side and others showed interest in signing the Spaniard.

The former Real Madrid man, for his part, has no intention to leave Diego Simeone’s 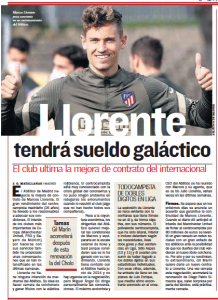 This feeling is also reciprocated by Atlético, who are planning to improve his salary, despite the financial impact caused by the global pandemic.

AS state the renewal is expected to be made official in the ‘coming days’.