The Belgian striker has been fantastic for Inter under Antonio Conte these past couple of campaigns, playing a key part in their title win this time around.

With 27 goals in 41 appearances, it’s no wonder other Premier League clubs are taking notice, with Chelsea and Manchester City both regularly linked with the goalscorer.

After all, Chelsea would know exactly what they were getting, having already owned the forward for three years before his £30m sale to Everton in 2014.

As for Manchester City, they are in need of someone new and preferably experienced up top as they will be waving goodbye to Sergio Agüero next month when his contract at the Etihad expires.

All this comes at a price, however, and it isn’t exactly a cheap one.

Corriere dello Sport cover the interest from both Chelsea and Manchester City on Wednesday, explaining that Inter have set a fee for a Lukaku transfer: €120m. 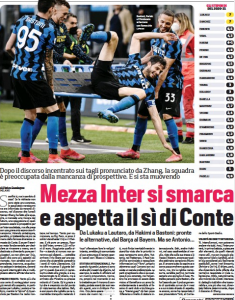 If that is met, ‘the green light could arrive for a sale that would help the accounts of Viale Liberazione a lot’.

In fact, it’s stated he would have already gone as far as ‘communicated to his entourage to keep the channels open with the Blues and the Cityzens’.

Key to all this would also be Conte’s future, as the Italian manager was the reason why he joined Inter in the first place.

As Corriere say, would Lukaku ‘be quiet if ‘his’ manager packed his bags’?

Our guess is no.