With an Italian owner, it’s only natural for the media in his home country to take interest in what Leeds United are doing.

This has only amplified after it was revealed Andrea Radrizzani was part of a consortium looking to buy Serie A club Genoa, with two Gazzetta dello Sport articles involving the newly promoted Premier League side on Tuesday.

The first is about their interest in Lyanco, which was brought to everyone’s attention by Tuttosport on Tuesday, with Torino wanting €10m.

Gazzetta talk about it briefly in their article on the matter, explaining that Leeds were among those interested in the Brazilian defender as they look to bolster their squad for the upcoming campaign.

They face strong competition from Sporting CP, with it claimed one of the player’s representatives had travelled to Portugal to hold talks.

The second article involves the deal we already mentioned in the second paragraph, that of Radrizzani’s interest in holding a stake in Genoa. 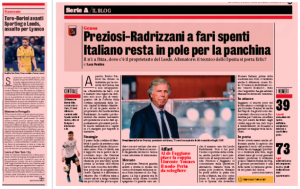 It was revealed on Tuesday that their first offer had been turned away, describing it as a ‘bar joke’, but all this is reportedly a front.

Gazzetta point out ‘the professional who are working on the operation have made an appointment later to make new assessments and understand if there is room for reopening negotiations’.

Leeds are going to be a big presence in this upcoming transfer window, so brace yourselves.