Home Premier League Arsenal Arsenal have made second offer for player – Gunners could return with...
SHARE

It took a while for the Portuguese press to bring us another update on Arsenal’s chase for Sporting starlet Joelson Fernandes, but newspaper A Bola has something very interesting today.

They claim the Lions have now rejected a second bid from the Gunners for the 17-year-old winger.

Following a first attempt of €20m, it’s said Arsenal made a new offer of €32m, and that was still not enough to convince Sporting to sell the youngster.

The Lisbon side are said to be determined not to let Joelson Fernandes go, which means they’re telling their local media he’s only leaving in case his release clause of €45m is triggered.

A Bola claims that since the English club heard that Sporting are in need of money, they’ll keep ‘testing their patience’ by making offers below that amount. 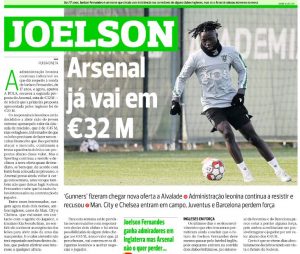 And since Arsenal are worried about the competition for Joelson, they could be back with a new attempt this week.

The newspaper claims there are two new clubs in the race. Chelsea and Manchester City recently got in touch with the player’s agent, Kia Joorabchian, to gather more information, and have no problem with how much he’d cost.

With more options from the Premier League, A Bola says that Joelson Fernandes should really head to England this summer, especially because the interest from Barcelona and Juventus seems colder now.