Leeds United are one of the clubs in the race for Brazilian defender Lyanco, according to claims on Tuesday.

Portuguese newspaper O Jogo brings a story saying Sporting made an approach for the defender, but seem to be unable to take him away from Torino.

The Lisbon side said they could pay €5m for 60% of the player’s rights, but the Serie A club quickly responded claiming they want €10m to let him go.

The reason for Torino to be so tough in the negotiations is that there are other clubs who are interested in Lyanco, and some of them can afford the price demanded by them. 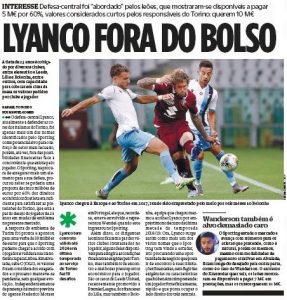 Leeds United are said to be one of the clubs in this list, with the competition from Lille and Bologna.

Torino spent €7m to sign Lyanco from São Paulo back in 2017, and now see the opportunity of making a little profit with his sale.

The defender struggled with injuries this season, having made 18 appearances, and there were few games when he was able to play for the 90 minutes.

That’s something Leeds United are probably aware, although it sounds a little concerning for a signing who wouldn’t be so cheap. Also concerning is the ownership situation, with it not being made clear why Sporting would make an offer for just 60% of the player’s rights.