Layvin Kurzawa’s situation at PSG has been under question for some time, with a parting of the ways seeming to make sense for everyone involved.

Tottenham were recently linked with the player, said to be keen on bringing the fullback in, and it makes sense if Mauricio Pochettino is to see the back of Danny Rose this summer.

Tuesday’s edition of Le Parisien has an article on possible PSG exits and signings in the next window, and they make a Kurzawa move sound very possible indeed.

The Frenchman is ‘the closest to the exit door’ among the club’s fullbacks and his departure is ‘clearly in tune with the times’.

Tottenham have signed two players from PSG over the past couple of windows, showing there’s working contacts between the two clubs. 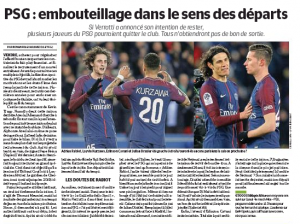 Serge Aurier arrived last summer and has had mixed success, whilst Lucas Moura has enjoyed a reasonable start to his Spurs career since moving in the January window.

Kurzawa is 25 years of age and primarily a left back, but can also play further forward if required.