International breaks usually provide a time for footballers to go back to their own countries, tell their local media about any annoyances at their current club, and then put it all down to mistranslation when they return.

Not for Celtic’s Kristoffer Ajer, who is thoroughly happy with his lot and has been praising the club’s fans in an interview with Norwegian newspaper Aftenposten.

Celtic fans are known around the world for their passion and support of Brendan Rodgers’ side and many before.

Aftenposten point out that former Celtic manager Ron­ny Dei­la compared managing the Scottish Premiership club with being prime minister of Norway, such is the high profile nature of it.

On the subject of the size of the club, Ajer explained: “It’s hard to describe the passion around the club. They were voted the world’s best supporters in 2017, and that adds up. It’s completely crazy and impossible to communicate during matches.” 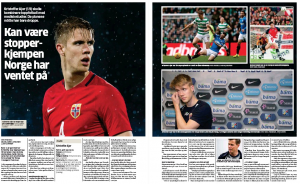 Some in Norway see the Celtic player as the country’s long term leader in central defence, but Ajer doesn’t want to get too carried away, telling the newspaper: “I’m still just a young boy of 19 years old at my first national team gathering, so it’s exciting to join.”

With the pressure of Celtic, which is always there, and Norway looking to him to provide a long term defensive solution, Kristoffer Ajer is at a crucial stage of his career.