That’s according to SportBILD, who say that Jurgen Klopp is keeping a ‘close eye’ on the 22-year-old midfielder.

Last summer, we covered several reports stating that Liverpool were keen on Baumgartner, with it explained that Klopp was a big fan of the player.

Manchester United were then brought into the mix as the player impressed at the European Championships, although it was explained both clubs would need a ‘mega offer’ to get him.

There’s been no mention of him since then, but SportBILD bring both clubs back into the mix again today.

They say that the midfielder has been impressing in the Bundesliga this season and has a release clause of €30m, a figure that isn’t putting off suitors. 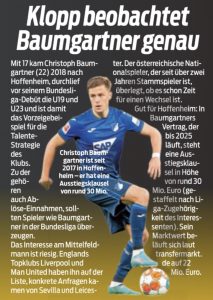 The interest in Baumgartner is ‘huge’, and both Liverpool and Manchester United are said to ‘have him on their list’ while there have been concrete enquiries from other suitors.

The player himself is said to be ‘considering’ whether now is the time to make a move, giving those interested parties a chance to get their man.

They, though, will have to match that €30m release clause, with Hoffenheim in a solid situation as they’ve tied the player down until 2025.