RB Leipzig’s Timo Werner was identified as one of the targets for Barcelona to strengthen their attack.

Thursday’s edition of Catalan newspaper Sport claims the German international has moved away from the orbit of the La Liga winners as Bayern Munich and Liverpool have taken the lead over Ernesto Valverde’s side in the race for the 22-year-old.

It is claimed the Bavarian club controls the transfer market in their own country when it comes to the signing of young talent in Germany, which is why they have identified the attacker as a target to strengthen their strike force for next season.

However, they will face competition from the Merseyside club, who have joined the race at the last minute for the Bundesliga star.

It is further suggested the Reds manager, Jurgen Klopp, who knows the German league very well likes his compatriot and also follows him ‘very closely’. 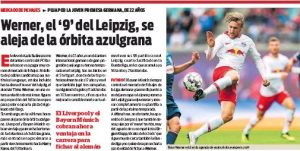 Sport claims Klopp and Liverpool do not want to miss the opportunity to sign Werner.

This feels very much like Liverpool being linked simply because their manager is German.