Espanyol’s derby defeat at the hands of Barcelona confirmed their drop to the second division, which will see players leave the club.

Over the weekend, we carried a report from Mundo Deportivo, who explained Liverpool are interested in Leandro Cabrera.

Mundo’s report also relayed claims made by PericosOnline, which explained the defender could go out on loan to a top tier club, as long as they take care of his full wages.

The centre-back joined Espanyol from Getafe in January and is on a €3m per season contract.

Another Catalan newspaper Sport states the Spanish side will see ‘several departures’ in the upcoming window and Cabrera is included in that list.

The Reds get a mention and it’s claimed Jürgen Klopp likes the Uruguayan’s courage and quality. According to the newspaper, the Merseyside club’s manager is of the belief that these two factors would make the player ‘very useful’ for Liverpool. 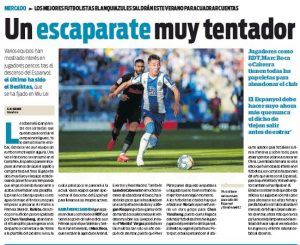 Sport doesn’t mention the conditions needed for the South American’s transfer, but it would certainly be financially possible for the Premier League champions.