Things couldn’t really be going much better for Liverpool’s title challenge so far.

Top of the Premier League, six wins from six matches, 14 goals scored, just two conceded, and everything is happy in the Jurgen Klopp wonderland.

This is of course making waves in the German media, where all things Klopp related are consumed with enthusiasm.

SportBild this week have a double page spread on Klopp and Liverpool, which is nothing unusual. In this edition, the magazine covers the manager’s ‘title-tricks’, what he’s doing to give his side an edge in the battle against Manchester City and others.

Warnecke has developed two special mineral drinks for Liverpool, report SportBild, one citron and one orange, to ‘significantly speed up regeneration after exercise’.

The German publication calls it the Reds’ ‘secret drink’.

Warnecke, who at 35 years of age in 2005 became the oldest person to win a swimming world title since 1971, has accepted a proposal to work with Liverpool’s nutritionist Mona Nemmer. 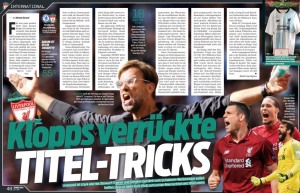 Nemmer, formerly of Bayern Munich is “The best nutritionist ever”, according to the drink specialist.

Drinks from Warnecke helped swimmer Dara Torres come out of retirement, after having a child, and make her best times for 20 years at the age of 41.

The improvement was so dramatic it led to suggestions doping may be at play, and Torres took the step of volunteering for extra drug tests to help keep her name clean.