It might have taken him some time to get his first start, but Everton’s Kevin Mirallas finally got the chance to show Fiorentina fans what he can do throughout 90 minutes on Tuesday night.

Despite losing 2-1 to Inter, La Viola gave a good account of themselves, only stopped from scoring more goals by a vigilant Samir Handanovic.

The Everton loanee came extremely close to getting on the scoresheet in the 4th minute as, cutting in from the left, his shot hit the post, only to then deflect off the goalkeeper’s outstretched hand away from danger.

Corriere dello Sport describe Mirallas’ performance against Inter as a ‘surprise’, voting him the second best player on the pitch for Fiorentina, tied with Nikola Milenkovic, and behind man of the match Federico Chiesa. 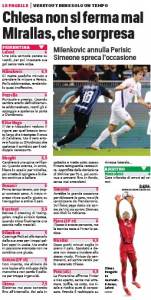 This was the Toffees man’s third appearance for the Serie A side, with the other two coming from the bench, and it’s one he’ll be looking to build on going forward.

Seeing as he’s already agreed a four-year contract with the Italians, there’s a strong chance his time at Goodison Park is up, but Fiorentina’s official statement explained the loan only has a right to purchase and not an obligation.

This means they can still send him back at the end of the season if he doesn’t perform, although if this first start is anything to go by, that seems unlikely to happen.