Birmingham City’s Jude Bellingham is the ‘greatest hope’ in English football and Manchester United, Liverpool and Chelsea reportedly want to sign the youngster, reiterate claims from Germany on Wednesday.

This week’s edition of SportBild claims Borussia Dortmund are interested in the 16-year-old and they have ‘won the race’ to acquire his services.

The Bundesliga club and the teenager should agree a deal for the summer move and he will be Dortmund’s club-record signing. They will pay €35m to the Championship side for his transfer, eclipsing the €30.5m Dortmund paid Bayern Munich for Mats Hummels.

According to the report, the English sensation impressed BVB scouts while in action for Birmingham City. SportBild states, Bellingham’s ‘right foot is immensely present, plays with great will, never gives up’.

Bellingham’s current deal at St Andrew’s runs down in 2021, but the German outlet states he will leave Birmingham City after the end of this season.

With Dortmund expected to complete Bellingham’s signing, they will beat the likes of Manchester United, Liverpool and Chelsea in the process. 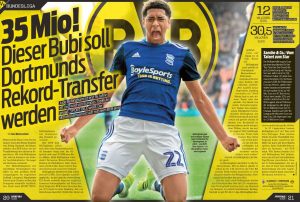 Bellingham has made 31 appearances in the Championship this season, scoring four goals and registering two assists in the process.