On March 1st we covered an article from A Bola on Alex Telles’ future.

It was made clear by the Portuguese newspaper that the left back doesn’t want to renew his contract with FC Porto, and that puts the club under some pressure given his contract expires in June 2021.

A Bola stated ‘everything indicates’ the player will leave Porto in the next market.

Chelsea were the only club named, with it being explained the Blues have made several attempts, without A Bola really going into the detail or timing of those efforts.

Those claims were quickly picked up and run with in England, and now they’re back with A Bola.

English reports are acknowledged, before it’s stated that should Chelsea want Telles then they’ll need to ‘approach €40m’. The Brazilian’s clause is €40m, and Porto will be fortunate to get a figure very close to that, given his contract situation. 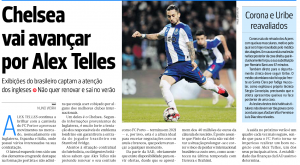 Porto have no intention of letting him stay and chancing a free transfer in 2021, but are determined to get the best deal possible. For that, they may well need competition, and Leicester City have been regulars at Porto matches recently.