If one chooses to believe that Borussia Dortmund send transfer messages through the German sport media, then it’s clear the club are getting a little twitchy over Jadon Sancho, and perhaps a lack of approaches for him.

Not so long ago there were multiple claims from Germany which stated Manchester United wanted to get a deal done before Euro 2020. That obviously raised the expectation among fans and made the story bigger in the English media.

Prior to that, the pressure had mainly been on BVB, with talk of big losses over the past year and of Sancho’s price dropping to as low as €80m.

Then when that poking of a stick didn’t seem to work, the claims of competition came, with Liverpool and Chelsea again brought into the picture.

Over the past week the theme has also been about raising Sancho’s price.

On May 23rd, Ruhr Nachrichten suggested a move was unlikely to happen before Euro 2020, and they talked up the player’s price. It was stated a deal could be done for ‘not far below €100m’, and that ‘patience’ was needed.

May 24th saw Bild report that Manchester United have been ‘warned’, referring to reported Liverpool and Chelsea interest.

They went on to say Ole Gunnar Solskjaer’s side faced transfer ’embarrassment’ last summer when they failed to take Sancho to Old Trafford, and wouldn’t want the same this time.

Sancho’s price was put at between €90m and €100m, which was presented as a good deal because the player’s value could ‘explode’ at the Euros. 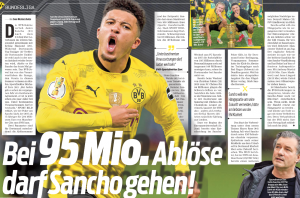 This week’s edition of SportBild covers the ‘Poker’, and their headline states: ‘With a fee of 95 million, Sancho can leave!’

The England international has been ‘promised’ he can go, and Dortmund’s ‘pain threshold’ is €95m, which would have to be ‘guaranteed’.

SportBild then lean on Transfermarkt’s valuation of €100m as some kind of proof that €95m is reasonable, but in reality what that website says will have zero impact on this move.

Sancho himself,is said to want his future known before Euro 2020, again putting more pressure on Manchester United. However, various parts of the article appear to doubt that possibility.

That said, SportBild end by stating: ‘If Manchester is ready to accept BVB’s demands, the Sancho Poker could be decided before the start of the European Championship. If not, the trade threatens to become a hangover again – and could even end with a stay. Because: BVB does not have any pressure to sell. Sancho’s contract will run until 2023.’

If this is not the German media reporting exactly what Borussia Dortmund have told them to, it’s doing a good job of disguising itself as that.