For over a month before it was announced Nuno Espirito Santo would be leaving Wolves, sections of the Portuguese press had pushed Bruno Lage forward as his likely replacement.

Even when it looked like NES would be staying at Wolves, it was claimed that Lage was holding back other offers, having confidence that the opportunity to manage the Premier League club would come his way this summer.

The slant was that with Jorge Mendes representing both men, he had a good idea of what would be happening.

Tuesday saw Record report Lage held a Monday interview with Wolves. Whilst it was still thought he was the main candidate, it was made clear he wasn’t alone, and the club had spoken to someone else on the same day. 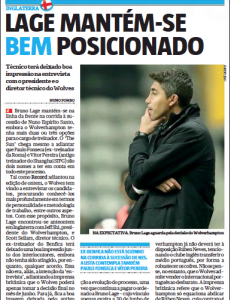 That other candidate remains unnamed.

Record‘s Wednesday edition reports Lage ‘awaits a decision’ from Wolves, having left a ‘good impression’ when chatting with Jeff Shi and Scott Sellars.

There’s no indication of when that decision will be made, and it’s made clear there’s no agreement yet between Lage and Wolves, something which would likely come quickly via Jorge Mendes.