There’s now widespread agreement in the Spanish sport newspapers that the man Real Madrid will be going for this summer is Robert Lewandowski and not Harry Kane.

Kane to Real Madrid has been something more strongly pushed by English tabloids and the more excitable rumour websites in Spain, and whilst newspapers such as Marca have touched upon it, it’s always been with one big caveat: Daniel Levy is so difficult to deal with.

Mundo Deportivo report in their Saturday edition that the ‘intransigence’ of Daniel Levy has seen Real Madrid give up on Kane before they even got started.

It’s accepted the Tottenham chief is set against selling his star player, and therefore Madrid have shelved the idea. 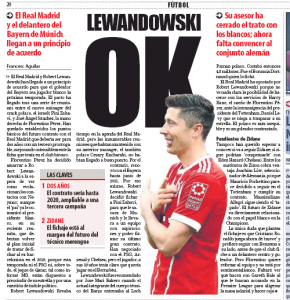 That leads them straight to Lewandowski and they believe it will be easier getting the Polish striker from Bayern Munich than it would be getting Kane from Spurs.

Another factor for Real Madrid is that it’s claimed Lewandowski really wants the move and has agreed already, via his agent Pini Zahavi.

Harry Kane was always unlikely to do similar behind the back of Tottenham and right now it doesn’t appear the England striker is so attracted by a move to Spain.