On December 11th, we carried a report from El Periodico Mediterraneo, who claimed that Leicester City’s Vicente Iborra has emerged has a target for Villarreal in the winter market.

Two days later, Super Deporte reported the defensive midfielder ‘fits more than ever’ in the Yellow Submarine’s squad and the 30-year-old needs to leave the King Power Stadium as soon as possible.

El Periodico Mediterraneo have some claims in today’s edition of the newspaper regarding the former Sevilla man and they mention that there is ‘interest’ from Villarreal to sign him next month.

Winger Diego Perotti and defender Iván Marcano of AS Roma are also on the radar of the Spanish club, but in the defensive midfield position, Iborra is the only target for them.

Villarreal were denied three points in the last league tie against Huesca as Samuele Longo’s stoppage time goal forced the two clubs to settle for a point.

They are now 17th in the table with 15 points after 16 games and club president Fernando Roig has said he could have funds reserved to make new additions in January. 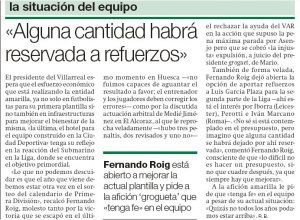 “I do not know whether it is covered in the budget, but I imagine that some amount will have been left there reserved. The difficult thing is not to make a budget, but to adjust later, since you always have to improve,” he said.