For some time it’s been reported in Spain that Vicente Iborra could be on his way back to La Liga.

El Periodico Mediterraneo have some claims in their Tuesday edition on Villarreal, who have also been linked previously.

After managing only three wins so far in the league this season, the Yellow Submarine are sitting in 17th position with 14 points, level with 18th placed Athletic Bilbao.

They sacked their manager Javi Calleja and appointed Luis Garcia Plaza as his successor on Monday.

The report claims the club’s president, Fernando Roig, is planning on making several reinforcements next month in order to improve his side’s chances of staying in the country’s top flight.

The two main names are the Foxes player and AS Roma defender Ivan Marcano. 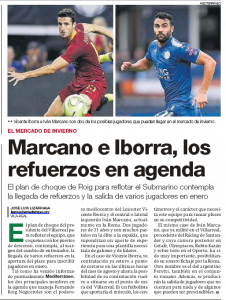 El Periodico Mediterraneo mentions Iborra would provide ‘muscle’ and height, while his ‘character’ would be an added bonus for Villarreal, if he joins them from the Premier League side.

Iborra has started in only three league games for Leicester this term and it should be seen if Claude Puel would sanction his transfer in January.