In mid July, Swansea City were repeatedly linked to Jonathan Viera by the Spanish media. Swansea were said to have offered €25m for the player, but already seen that knocked back, and, just like Everton, were prepared to pay the player’s release clause to secure a transfer.

Viera’s clause is €30m, with not much room for the 27 year old’s value to rise. Swansea City had already paid the player’s club, Las Palmas, the clause to sign Roque Mesa but that was less than half the amount for Viera.

Everything went quiet, with Viera expected to get a pay rise, and it was no surprise that Swansea didn’t meet the €30m clause. On Friday, the Welsh club were dragged back into the equation, as Canarias 7 reported the money from Gylfi Sigurdsson’s would be motivation to seal a deal.

Sigurdsson hadn’t even been sold, and already the Spanish media were spending Swansea’s money for them. 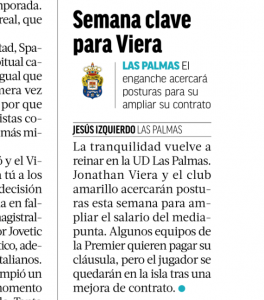 It’s no great surprise that Marca report on Monday Viera is now closer to that pay rise.

Despite only renewing his contract in November, Viera is set for a pay hike and will stay where he is, regardless of interest from the Premier League.

Swansea City seem to have been used to help hype up a potential Viera exit, and therefore make a pay rise more necessary than it really was.