Although Liverpool have been pointed out today as the latest contenders for the signing of Bruno Fernandes from Sporting, it’s still Manchester United and Tottenham who get mentioned by all the Portuguese newspapers.

Most outlets only mention the two clubs to keep the story alive, and Correio da Manhã takes the player’s post on Instagram thanking the Lions’ fans as a potential ‘farewell’ to the club.

But it’s O Jogo who brings some information saying something could happen this week. They claim Fernandes’ agent, Miguel Pinho, is flying to England today, and is set to meet the Red Devils and Spurs once again.

O Jogo claims that Sporting’s board is expecting ‘important developments’ on the process in the next few days, although there’s nothing about bids from the English sides. 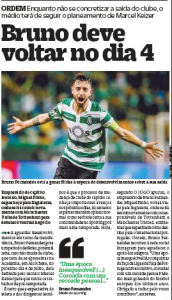 While Fernandes’ departure from Sporting isn’t made official, he’s set to be joining the squad on July 4th.

O Jogo are still pretty confident that things are happening, but if the Lions want him working with the team in preseason, perhaps the club aren’t so sure about it.

Manchester United’s reported interest goes back to March and some claims in Portugal have said they don’t need to sell players to raise funds, whereas Tottenham do.

That would give them an advantage, but if they don’t do anything about it then it’s useless.

It’s Pinho’s job to unblock this one and get an acceptable offer out of someone, with the general belief, despite Liverpool being brought in, that it’s Manchester United being targeted for that, as Tottenham wait with the Eriksen situation.