Perhaps one of the least surprisings exits out of Anfield over the summer, Lucas Leiva’s transfer to Lazio was still an emotional affair.

After all, the 30-year-old had spent a decade at Liverpool, and while he was never a key player of Jürgen Klopp’s teams, he remained a useful player, capable of helping out in defence as well as midfield.

Wanting a bit more than sporadic first-team action, Leiva decided a move to Italy was what was best for his career, and it’s worked out magnificently, with the defensive midfielder now one of the vital cogs of Simeone Inzaghi’s success this season at the helm of an impressive Lazio ship.

Speaking to Corriere dello Sport ahead of his first Rome derby, the former Brazil international revealed how the move came about.

He said: “I was first contacted around June, when I was on holiday, but my agent told me I had to wait. Lucas Biglia’s situation was still unsolved, and I wanted to return to Liverpool to talk with them. I always had a very good relationship with the Reds, and they never stood in my way or caused problems”.

At that stage, there were still doubts over Biglia’s move to AC Milan, which eventually happened, and Lucas Leiva didn’t arrive at Lazio until around mid-July. 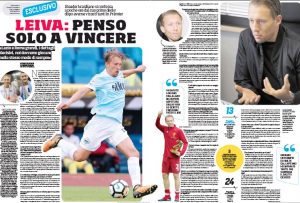 However, the defensive midfielder knew it was the right time to leave the club he had made his home over 10 years, as difficult as that was.

He explained: “When my agent called me and offered me the possibility of going to Lazio, I thought that was a good idea. After being at Liverpool for that long, I needed a new challenge, and Lazio, Serie A, Rome were all positive factors in my decision to come here to play.

“Last season also played a part. It was positive for Lazio, and the opportunity to play in the Europa League definitely convinced me. I understood how important it was for me to accept the offer”.

Since his arrival, Leiva has been near ever present for the Italian side, missing just three games, totalling 13 appearances in all competitions.