During the summer, Liverpool were incredibly stubborn in their pursuit of Virgil van Dijk.

Having gone into the potential Southampton transfer likely being too cocky or arrogant, Liverpool thought they’d got close to a deal, by agreeing with the player, but then had to backtrack and issue an apology to Southampton.

Whilst Liverpool aren’t the only club who conduct transfer business by getting the player onside first, they’re one of very few who think it’s then a good idea to almost brag about it to the media.

With the Van Dijk chance pretty much gone, Liverpool were then left with the option of signing an alternative, one they didn’t take. Jurgen Klopp is clearly so keen on the Dutchman that nobody else will do.

Former Southampton manager Claude Puel thinks of Van Dijk just as highly and, as a defender, believes the player is the best in Europe. 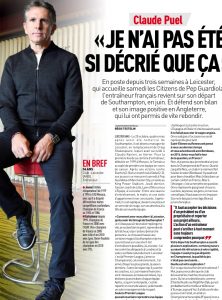 Speaking to L’Equipe about Southampton’s injuries last season, Puel said: “We had injuries, like (Charlie) Austin or (Virgil) Van Dijk, who is probably the best defender in Europe, today.”

That’s the argument for waiting, there’s perhaps a stronger argument to be made that Liverpool should have signed another central defender anyway, and still waited to get Klopp’s first choice Van Dijk.

Liverpool may find it difficult again in January, and their Van Dijk chase may have to wait until the summer to see success.