Edgar Cani signed for Leeds United from Catania in 2015, and was a signing which had the fingerprints of Massimo Cellino all over it.

He arrived on a loan deal, with a view to making the switch permanent if things worked out, and it’s fair to say they didn’t.

Despite arriving in February, Cani took the number 10 shirt from Granddi Ngoyi, who had been another disappointing loan signing. Cellino clearly had big hopes for a player that would be seen as one of his group of personal signings at Leeds United.

Just a couple of months after he signed, Cani was one of the ‘Cellino Six’ who withdrew from the Championship club’s squad with injury a day before their 2-1 loss to Charlton Athletic.

Of course, the “injuries” weren’t believed, and it was another low point in the Italian owner’s stewardship at Elland Road.

Speaking to La Repubblica about his career this week, Cani was asked why he left Leeds United to then join Pisa in Serie C, and explained: “At that point I needed a project that would allow me to find continuity and so I decided to return to Serie C, to Pisa. It was the 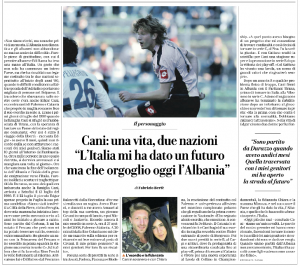 right choice. With Gattuso I lived a fairytale, a man of great values ​​whom I will always thank. Future? I can’t wait to get back on track, but the first thing that matters is getting back to normal. We must all get up together.”

The 30 year old is currently without a club, having last played for Vibonese.