With a contract expiring in the summer, Willian has already admitted it is difficult for him to sign an extension at Chelsea.

On April 6th, UOL from Brazil explained the 31-year-old is leaving Stamford Bridge and suggested Barcelona as one of the potential options for next season.

Tuesday’s edition of Sport gives a background on the La Liga winners’ failure to bring the winger to Camp Nou in the past because they couldn’t agree a deal with Chelsea.

The English club are no longer an obstacle for Barca to sign Willian because he will be available on a free transfer. Sport say this gives them the chance to catch the ‘last train’ to sign an ‘object of desire’.

To convince the Brazilian to join the Catalan club, Barca will have to fulfil his demands. 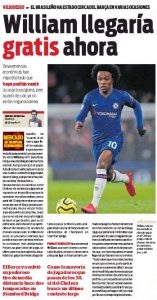 Willian, who will turn 32 years of age in August, is looking for a ‘long contract’. In addition to this, the player is also demanding bonuses for him and his representative.

The South American wants the Spanish champions to meet these conditions in order to ‘turn a deaf ear’ to other proposals he has received so far.

Whether Barcelona will accept these terms remains to be seen.