Home Premier League Arsenal “What I feel most is frustration” – Arsenal transfer not exactly working...
SHARE

For much of the summer transfer window, Lucas Perez and his agent did everything they could to force Arsenal into agreeing a loan move for the player to return to Deportivo La Coruna.

Arsenal were the big bad wolf, preventing Perez from doing what he most wanted and therefore holding the 29 year old’s career back.

There seemed little desire from Perez to fight for his Arsenal future and the whole move to England almost looked planned as a short term thing to boost the striker’s wages. Once a player is on big wages it usually plays the trick of making any future contracts that bit juicier.

In the end, Arsenal relented and Perez was allowed the Deportivo loan at conditions which more suited the player than the club which own him. 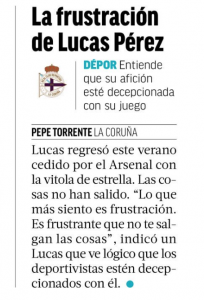 Besides from a short purple patch in the autumn, it’s been a disaster goals wise. Lucas Perez hasn’t found the back of the net since November.

In their Friday edition, Marca quote the player as saying: “What I feel most is frustration.”

He’s not the only one, Deportivo fans aren’t thrilled with his return, and a permanent deal looks increasingly unlikely.

This is all a problem for Arsene Wenger and Arsenal, who have Perez on a contract until June 2020.