The end of the January 2017 transfer window was rather stressful for Fulham fans. The club were omnipresent in Europe, trying to sign a list of strikers so long that it became comical and genuinely entertaining.

One of those was Yohan Boli, who confirmed Fulham’s efforts the following February: “I’m not lying, I would love to play for a club like Fulham. But it was Tuesday I first heard of their interest. When I take a step, I want to discuss it calmly with my family, but there was not time. It all went very quickly.

“Therefore both STVV and I came to the conclusion that it was better to stay at Stayen. I’ve got a lot of work to do, if everything goes according to plan, that lucrative transfer will probably follow. And then both the club and I get better from there.”

It’s safe to say that so far everything hasn’t gone according to plan.

In April, a story emerged in Belgium of Boli having an agent dispute. Eric Depireux believed he had been stabbed in the back by Boli and his family, having masterminded the early part of the player’s career well. 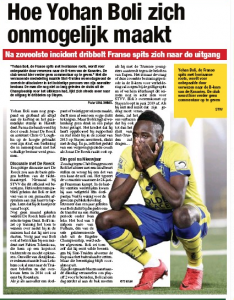 Warned off working with the striker, who had been described to him as a ‘sh**ty kid’, Depireux explained he’d always tried to see the good side, but had then been double crossed.

Friday’s edition of Het Belang van Limburg details more problems with the player. STVV have sent him to train with the kids after a string of issues, including rowing with his manager and not putting in effort during training.

Fulham’s failed €3m offer is once again mentioned, and STVV probably wish that transfer had gone through.

It’s also claimed there was other Championship interest, but would Slavisa Jokanovic and others be so keen now? Probably not.