Home Europe “I don’t think about it” – Player unfazed by clause agreed between...
SHARE

Obbi Oularé spent last season on loan at Standard Liège from Watford and despite struggling with injuries, the Jupiler Pro League side made his transfer permanent in May 2019.

This was confirmed by both the Hornets and Standard Liège on their official websites, but no further details were mentioned in the statements, including the length of the contract and the transfer fee. He signed a four-year deal with Standard.

There had been suggestions the 24-year-old would only officially become a Standard player after he’d completed 900 minutes of action, given he was returning from injury.

It was also stated Standard will pay Watford the transfer fee once the attacker achieves this target. So far, he has spent less than 400 minutes on the pitch.

Het Belang van Limburg had an opportunity to have a chat with the player and asked him about the clause allegedly agreed between Standard and Watford. 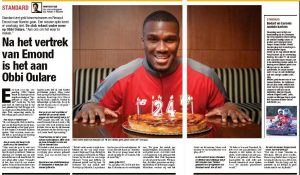 Responding to that, Oularé said, “I belong to Standard. I signed for four years. That clause is something between the two clubs, I don’t think about it.

“No matter what happens, I am a Standard player. I don’t even know how many minutes I have to play before that clause is activated.”