The UK and the most of the world is facing a crisis due to the Covid-19 pandemic.

The ongoing situation has resulted in suspension of Premier League, at least until April 30th, and the break has allowed several players and managers to be interviewed.

L’Equipe had a chat with Everton manager Carlo Ancelotti, in which he admitted the situation in Italy has made him realise the importance of staying indoors.

“I am in Liverpool, with my wife and my daughter-in-law. My daughter and her husband, my son and his wife are also in England,” he said.

“We are allowed to go out once a day but I try not to do it too much. I stay at home as much as possible, it’s important. I follow the instructions of the government. I also see what is happening in Italy and I don’t want to take any risk, either for myself or for those around me.”

When giving an insight on his recent daily routine, the Toffees boss also explained how he is utilising the time available to focus on improving his own health.

“You do things that you have never done before (he laughs). To me, it’s a little strange. No, I never did that. But I have to, I have to adapt,” the Italian explained.

“So, I focus on a few more personal goals. For example, I have to put my knee back in place, so I do a little bit of cycling. A little bit of a diet too… It’s not bad for losing weight. Afterwards, I watch some of my team’s matches.”

“I also keep in touch with the players. I do not call them regularly but, with the staff, we send them a training schedule which we update to keep them in good physical condition.”

When L’Equipe quizzed if he misses football, Ancelotti said: “Of course, I miss football. I like to train, I like to watch matches, this is normal.

“However, football is not my priority right now. In fact, I don’t care if we will resume in June, July or August. Really. First there are lives to think about today.”

Everton’s derby rivals Liverpool are top of the table, ahead of second placed Manchester City by 25 points. The Reds were in firm position to clinch their first even Premier League title before football was suspended due to the Coronavirus outbreak.

There have been rumours about the league being declared void, meaning Liverpool will have to wait longer to get their hands on the Premier League title.

L’Equipe asked the Everton manager if he would ‘understand that the Reds would find it unfair that the season does not resume?’. 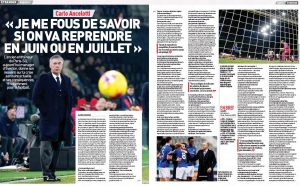 Responding to that, Ancelotti said: “Yes, I understand. But, again, what matters today is that the health of all people is assured.”

“We should only think about that. It is for this reason that we must follow the advice of the government to the letter and stay home. This is the priority. Only the government can make the decisions.”