Home Europe “I have desire to play in England” – Player speaks of PL...
SHARE

On Thursday, we covered news from Portugal which detailed Bruno Fernandes breaking two doors after being sent off against Boavista at Estádio da Bessa.

Tottenham Hotspur tried to sign the player in the summer window, with their offer confirmed by his club.

The Sporting midfielder was back in action last night, this time in the Europa League. And when speaking to the Portuguese media after the game, he was obviously asked about the incident.

“Everybody knows how Portuguese football works, what weighs on things and the negative image that they try to pass from a player, especially when that player belongs to Sporting,” said the midfielder (via O Jogo).

“Many times these episodes that should not happen, I do mea-culpa, it happens. I wasn’t just sent off for the context of the game. A lot of people don’t know what they are saying, at any moment I have something against Boavista. I am the only player from the Boavista academy who speaks of Boavista, the only player who has respect for Boavista and would never do anything to harm them. It was my first sending off at Sporting.” 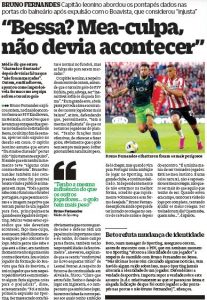 After being heavily linked to a Premier League move this summer, with Tottenham’s attempts proving futile, Bruno Fernandes was asked if he’s happy at Sporting.

“Of course I’m happy. I have the desire to play England, this is the league I want to play, there are other clubs from other countries and I have the ambition to get there, but when I came to Portugal I had the ambition to play at Sporting, in a great club, and I’m still delighted. Regardless of whether we’re not in the best shape, I believe we’ll quickly return to that desired form.”

Last night was a normal night for Bruno Fernandes, given he scored a goal. He now has four goals and four assists in only seven appearances this season, which promises to be as good as the previous one.

But Sporting are currently struggling in 5th place in the Portuguese league, and after losing their first Europa League clash of the season, perhaps the captain is now even more worried about the season.

Maybe Mauricio Pochettino can push Tottenham to try again, either in January or next summer.