Hull City are reportedly insisting on getting Marvin Zeegelaar from Sporting CP on a loan deal. After claims on Tuesday said this kind of deal had been turned down by the Portuguese club, it seems the Tigers are building up good arguments to convince them.

O Jogo had Tuesday’s report, but now it’s Jornal de Notícias who come up with the updates. They say Hull will be offering Zeegelaar a salary of €500k for the year he would spend at the club. That’s much more than the €180k he earns at Sporting.

The Portuguese club would rather sell, because otherwise they’ll have the same work to offload Zeegelaar next summer. But Hull are also offering Sporting €500k for the loan, and believe that will be enough to convince them. 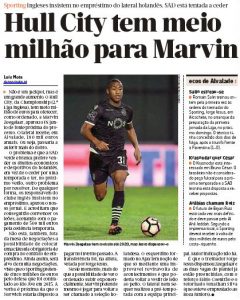 Jornal de Notícias claim it’s possible that Sporting will demand an obligatory buying clause at the end of the spell. They would ask for €5m, as they’ve been doing for months.

Despite having blocked a move to Norwich City last winter, Zeegelaar now only wants to play, and Hull could give him this chance. He’s already been told he’s not in Jorge Jesus’ plans for the season.

That’s why the Championship increasingly looks like a good option.