After some rather strange calmness emanating from Italian papers last week, it seems Riyad Mahrez might not be going to Roma after all.

Gazzetta dello Sport are the ones providing an update, and, as things stand, Monchi is seriously considering moving onto alternative targets, as Leicester refuse to budge on their demands.

The Italian newspaper state Roma ‘don’t want to go beyond €30m’ (bonuses included), while the Foxes are still very stubborn about their €40m asking price.

The problem now, other than money, is that the Premier League season is fast approaching, with Arsenal and Leicester playing each other next Friday.

Gazzetta explain that if we reach August 12th and Mahrez is still at the King Power Stadium, things will be very difficult for Roma, making August 11th D- 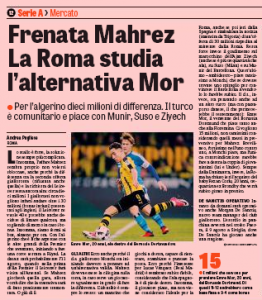 Day for any transfer to happen.

If the Algeria international plays in the Premier League opener, then Gazzetta say the whole saga will ‘in fact almost be over, or close to’.

While the names of Ajax’s Hakim Ziyech, Barcelona’s Munir and AC Milan’s Suso have been recurring as alternatives, a new one has appeared, and it’s Dortmund’s Emre Mor, allegedly available for around €15m.

Cheaper than Mahrez, yes, but certainly not as good just yet.