On Thursday we covered a claim from Belgium that Anderlecht is a new possible destination for Thomas Vermaelen.

With stories on the Barcelona side going quiet as the Neymar circus exploded, links moved from West Brom to Anderlecht.

To round things off, we added: ‘There’s every possibility West Brom will be thrown back into the picture soon, probably by the Catalan press when they get bored of Neymar.’

Inigo has a very reasonable buyout clause of €32m, but Barcelona would need to offload a defender first.

That’s where the Baggies come in, and Mundo Deportivo say Vermaelen is an exit option 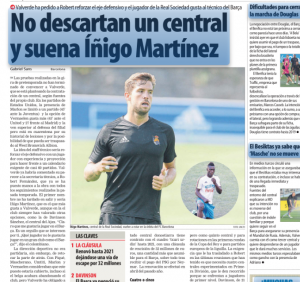 because of ‘the possibility that he may be transferred to West Bromwich Albion.’

West Brom’s links started in England, but were quickly picked up in Spain, and it’s very clear that if Tony Pulis interest is genuine, Barcelona would listen to the club’s advances.

Indeed, that’s the hope. That’s why Mundo Deportivo are still clinging to the West Brom link.