It’s fair to say Sky Sports aren’t having the best summer for transfer claims. The term ‘Sky Sources’ has become a target of mockery on social media, and whilst Sky get a lot of stick because of their size, they’ve not exactly done themselves any favours this window.

That’s why when Sky linked West Brom to Thomas Vermaelen it didn’t generate a lot of excitement. English newspapers covered it, but it was just thrown in as another maybe, and likely a rumour that would come and go.

The Spanish press did grasp the West Brom claims, continually looking for a way Barcelona can sell Vermaelen. Neymar’s saga has pushed everything to do with Barcelona to the side, and, for now, Vermaelen to West Brom has gone quiet both in Spain and England.

In the defender’s native Belgium there’s another club being linked. Anderlecht won the league this summer, and there’s confidence of another good season ahead, and hopefully a repetition of the club’s good European run.

Belgian newspaper Het Belang van Limburg say Vermaelen could be a possibility for the club, and there’s no mention of West Brom interest. 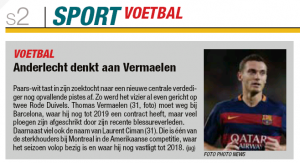 What is mentioned is Vermaelen’s poor injury record, and that’s one of the reasons these links keep coming and going.

There’s every possibility West Brom will be thrown back into the picture soon, probably by the Catalan press when they get bored of Neymar.