Even if you’ve only been remotely been tracking the activity on the transfer market rumour mill in recent months, you’ll be aware that AS Roma aren’t in the best position financially.

The Serie A side want to do so many things, like keep Chris Smalling and Henrikh Mkhitaryan, but without Champions League money (they are currently fifth in the league), such moves will be difficult to pull off.

That’s why their director of football, Gianluca Petrachi, is trying to find alternative ways to strengthen the squad, which could include some ‘low cost’ deals like one for Liverpool’s Dejan Lovren.

This is what Gazzetta dello Sport are reporting on Tuesday, explaining the Croatian isn’t really in Jürgen Klopp’s plans (as shown by his nine Premier League appearances), meaning he will need to move to help his career get back on track.

Marry that with his contractual situation (he has one year left on it), and an exit from Anfield seems very likely. 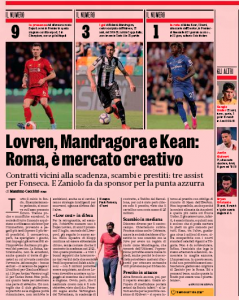 AS Roma are lurking, and it’s explained the good relationship between the two sides after the deals for Alisson and Mohamed Salah could help the Italians get a discount on Lovren, as Gazzetta report he ‘could be bought with €5m’.

If Liverpool do accept that fee, it will then be up to the Serie A side to convince the player to accept a contract worth a maximum of €3m/year.

It’s certainly worth a try, and it could all come down to how desperate the Croatia international is for first-team football.