Turkish newspaper Aksam claim West Bromwich Albion will make an offer for Fenerbahce striker Vedat Muriqi if they get promoted to the Premier League this summer.

Slaven Bilic’s side were sitting 2nd in the Championship, six points ahead of their closest rivals Fulham, before the English second tier stopped due to the Coronavirus outbreak.

It’s stated West Brom are the latest club to show an interest in the Kosovo international, and they are ready to offer €20m to Fenerbahce to make the transfer happen.

West Brom manager Slaven Bilic, who’s familiar with Turkish football after his spell at Besiktas between 2013 and 2015, is said to be behind this pursuit. Despite leaving the country almost five years ago, the Croatian still remains a popular figure in Turkey. 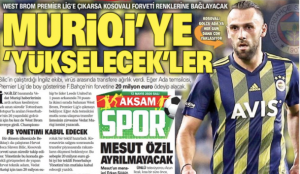 According to Aksam, Fenerbahce’s board will be happy to accept this amount for Muriqi, as they feel €20m would reflect the actual value of the player.

There had been previous reports they’d accept €15m.

The 26 year old’s agent Haluk Canatar revealed this week that Burnley made an official offer for his client in January, which was rejected by Fener.

Everton still ‘dreaming’ for Benitez replacement – ‘Offered him’ a deal, ‘not forgetting about him’

Everton still ‘dreaming’ for Benitez replacement – ‘Offered him’ a deal,...