Ederson has a chance to say goodbye to Benfica’s fans on Saturday, as the club play their final home match of the season. Facing Vitoria de Guimarães, Benfica can become champions, but for some players it will be the last time they run out at Estadio da Luz as a home player.

Once again named as a Manchester City target, with no other clubs named this time, A Bola say that Ederson could be leaving Benfica in the summer transfer window. The Portuguese club would look to receive €30m from the transfer, but with Rio Ave due 50% of any deal, they’ve got some talking to do.

The Brazilian goalkeeper has been excellent this season for Benfica, and at 23 years of 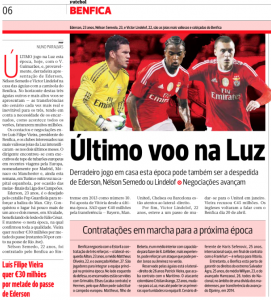 age has plenty of time to improve.

Whilst Bayern Munich manager, Pep Guardiola praised Ederson and that’s something which has underpinned Manchester City links throughout this season.

Ederson may accept a role to battle with Claudio Bravo, but given the fee Manchester City would have to pay, it would be assumed he’d arrive as number one goalkeeper.