Newcastle United are the latest English club to be dragged into transfer rumours currently revolving around Ruben Semedo. Sporting seem to be pushing the young defender towards the market, keen to see what Premier League clubs are prepared to pay, and the Portuguese media are publishing stories claiming new interest almost daily.

A Bola, in their Saturday edition, claim, that after Everton and Southampton, Newcastle are now muscling into the picture. Rafael Benitez wants to improve his squad for a return to the Premier League, and the club are said to have contacted Semedo’s entourage.

The contact is to find out the player’s thoughts on a summer move, before Newcastle would then contact Sporting to discuss price.

Semedo, 23 years of age, is primarily a central defender who can play in a defensive midfield role as well.

Sporting are protected by Semedo’s €45m buyout clause, and it’s got to be considered out 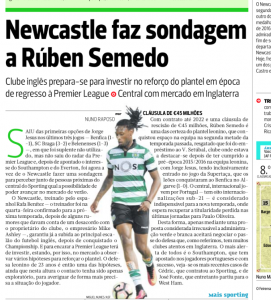 of the question that Newcastle United would go to such an amount.

They probably wouldn’t need to, but Benitez interest is questionable even before talking about price, especially after the manager made it clear he’s looking to add Premier League experience.

The strongest links over the past year have been with Southampton, with Everton’s interest also questionable.