At the end of September, we relayed news from Spain that signing Paul Pogba is ‘almost impossible’ for Barcelona because of his salary demands of €12m-a-year and his representative, Mino Raiola, demanding a high agent fee.

Friday’s edition of Mundo Deportivo has a story about the France international and they explain why Manchester United will not allow their midfielder leave the club.

The Catalan club had contact with Raiola and asked Red Devils executive vice-chairman, Ed Woodward, about their star player.

He was also interested in making a switch to the Camp Nou as it’s his dream to play alongside Lionel Messi, according to the claims.

It’s now reported that his wage demands or Raiola’s agent fee had nothing to do with why the deal didn’t take shape. The report suggests the English club’s owners, the Glazers refused to sanction the sale of their prized asset as they believe Pogba is their ‘Messi’. 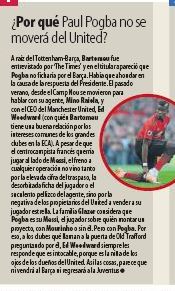 The Glazers view the 25-year-old as an integral part of their project, with or without Jose Mourinho ,and this is why Woodward has already closed the door for Pogba’s exit, who is ‘untouchable’ at Old Trafford.

That’s perhaps a more palatable excuse for the Catalan media as to why they can’t sign the Manchester United player.