After Chelsea’s victory over Southampton, Eden Hazard publicly expressed his desire to play in Spain.

Spanish newspaper AS’s report on Wednesday viewed it as the forward already taking the ‘first step’ to make a switch to Real Madrid, who are planning to sign him either in January or after the end of the season.

The same publication has a story about the former Lille man and they claim the Champions League winners ‘will be watching’ the player in action for Belgium against Switzerland during the UEFA Nations League clash on Friday.

The report once again mentions the west London club’s star is the big target for the 13-time European champions next season. His contract at Stamford Bridge runs down after the end of the season and he’s yet to commit his future to the Blues.

Hazard has had a good start to the 2018/19 season with Maurizio Sarri’s side which has seen him score eight goals in all competitions, while Real, on the other end, have struggled and have failed to score in their last four matches. 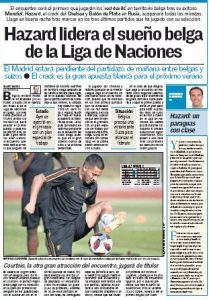 The Belgian can fill in the void left by Cristiano Ronaldo’s departure in the summer and should the former move to Santiago Bernabéu, he is likely to bolster the La Liga giants’ attacking division.