Sport, the Catalan newspaper Liverpool fans must by now hate, are at it again on Monday. Last week Sport published claims of a transfer summit in Boston between Coutinho’s family and FSG, and now they have an update.

In claims that will surprise nobody, Sport say Coutinho to Barcelona could now happen in the January transfer window. The Boston meeting has fixed bridges and now, rather than trying everything to be awkward in talks, Sport say FSG are now showing some willing.

In August, Sport believe FSG were so set against a sale because Jurgen Klopp had made assurances about a battle for the title. Now, with ‘reality’ ruining those plans, FSG realise Klopp’s commitment was wrong, and will look towards a possible Coutinho sale. 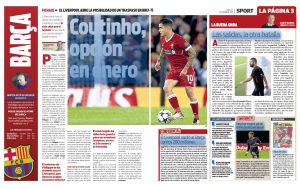 Coutinho has once again expressed his desire to leave Liverpool, according to the Catalan claims, and that he’s cup-tied for the Champions League isn’t presented as a huge problem… despite Sport suggesting so before.

The €200m price is once again talked about as a starting price for Liverpool, although it’s believed there’ll be a cheaper price available next time.