Southampton’s Sofiane Boufal spent last season on loan at Celta Vigo and the La Liga side have been hoping to sign the forward for this campaign.

On August 20th, Celta’s director of football Felipe Miñambres suggested the Saints could be open to the idea for a possible transfer after initially closing the door.

AS on Friday claims Miñambres activated the operation to sign the 25-year-old after failing in their efforts to sign Nolito. Boufal was subsequently identified as the club’s plan B.

He came off the bench for Southampton against Burnley in the first match of the club’s season, but was left out of the squad against Liverpool. Celta’s idea was to convince the Morocco international to join them after having missed out against the Reds. 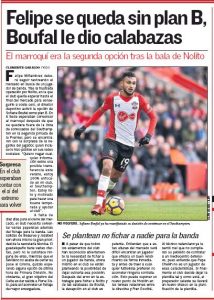 Their hopes of signing Boufal were crushed when the player took to Twitter to deny any rumours about a potential exit from St Mary’s Stadium.

Boufal’s decision to continue at Southampton will force Celta to look at other options in the market.