Southampton’s Sofiane Boufal spent the last season on loan at Celta Vigo and had a reasonable campaign with the Spanish side, scoring three goals and registering three assists in 35 league appearances.

Last month, Foot Mercato reported that Marseille, Nice and Bordeaux are after the winger, but there has been no progress for a transfer so far.

AS explain Celta are looking to bring in a wideman before the European transfer window closes on September 2nd.

Felipe Miñambres, the Celta director of football has stressed that Southampton had initially blocked the 25-year-old from returning to the club.

“Southampton initially closed the doors for Boufal’s return, but let’s see now. He is a player that has different characteristics than what we have,” Miñambres explained.

AS’ report does not mention if Celta are looking to sign the French-born Morocco international on a loan deal or a permanent transfer. 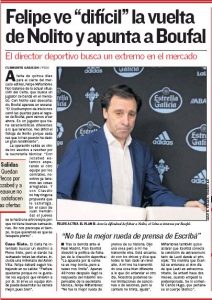 They claim Miñambres has given an impression that he likes Boufal and has identified the wide player as an ‘option’ in the final weeks of the transfer window.

However, the Vigo based newspaper claim a loan deal will not be easy for Celta.

“We’ll make more noise than them” – Club Brugge fans in...